Which attachment is visible for a slot can be changed during an animation by setting an attachment key.

Attachments can be organized using skins.

When a path is specified in the Image path field, the attachment name won't correspond to the path anymore, but this path will be used instead.

Attachments can be turned into meshes by checking Mesh, and vice-versa.

Unchecking Select makes an attachment selectable only from the tree hierarchy.

When Export is unchecked, the attachment won't be exported unless it is keyed in an animation.

These two last settings are particularly useful when using reference images in a project such as a background, or animation sketches.

Attachments which use images, such as region and mesh attachments, can be tinted by setting a color in the attachment's properties at the bottom of the tree. This color cannot be changed in animations.

To tint an attachment in an animation, the color is set on the slot rather than on the attachment itself. The color is specified in the slot's properties at the bottom of the tree and can be keyed. 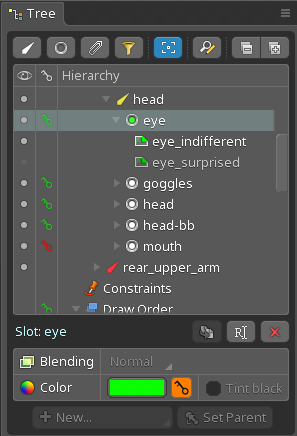 Tint black is enabled by checking Tint Black for a slot, which causes a second color button to appear.